Well, this is our new website.  It may look very much like the old site, for those of you who have been there, but it's cleaner, neater, and easier to use.  So, as long as we're starting somewhat fresh, I'd like to explain how the name, Dusty Dog Digital came to be.

Dusty Dog Digital was named for my big German Shepherd (GSD) mix, Zuki.  She was big.  She was pretty much as large as a female GSD gets, at 110 lbs.  But, she was also part wolf.  I was told from the shelter I rescued her from that her father was full GSD and her mother was part wolf.  She looked like a wolf, except for those big GSD ears.  Dead give away that she was not a wolf.  But, she was big.  And, she howled.  And, she was a shedding machine.  And, she liked to den.  Kind of wolf-like, from what I know about wolves. 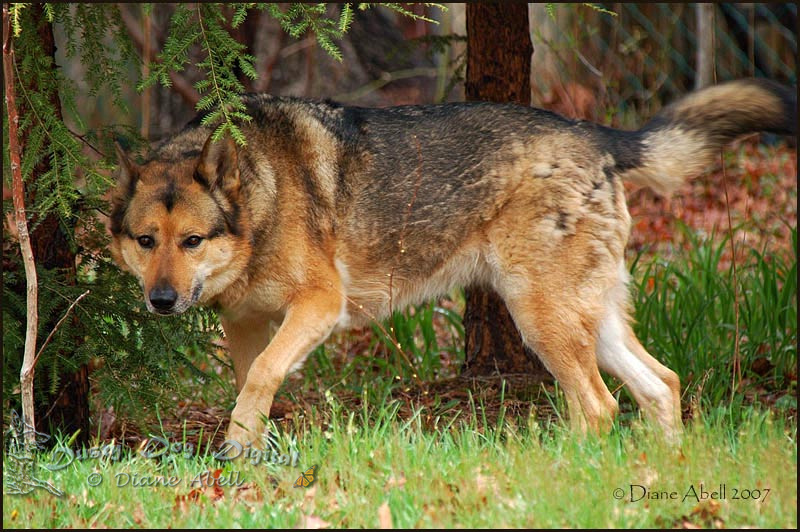 Zuki was my wolfdog.  I never originally intended to get a wolfdog, but she needed to be rescued desperately, and I needed to have a big dog.  I rescued her when she was 1-1/2 years old and was her fourth owner.  She was a mess.  She was scared, untrained and dare I say, even dangerous.  Fear aggression makes for a dangerous dog, but I took her in.  I made a commitment to her that if she couldn't learn to live in a human world, then I would drive her to Minnesota to a wolfdog rescue.  But, she would never spend another minute in a shelter, or chained to a tree, or beaten because she just didn't know what was expected of her.  But, she did learn.  She learned well, and we were a team.  And, I kept saying that I should use her to advocate against crossbreeding wolves and dogs.  It's a practice that is cruel, unjust, and confusing to the resulting animals.  Unless they're totally understood and worked with appropriately, they end up kind of torn between two worlds.  Zuki was definitely a dog.  The dog behavior prevailed. But, she also had this feral thing going on, which I surmised was a wolf thing.  I clearly had to be the alpha, or all would have been lost.  She did challenge me a few times, but I prevailed, and we were buddies.  She was my wolfdog.

In order to not have to be a doorman to my animals, I used to leave the door open just a bit so they could push and/or pull the door open on their own.  It worked great, except when they chose to bring in ugly stuff, like dead mice.  But, that's why I got the cats.  They were just doing their jobs.  I can live much better with cats than with mice.  But, every once in a while they brought in a rabbit or a bird.  Not cool, but they were cats.

As for the Zuki, she liked to den under the porch.  I found that amazing because there was not a lot of space under the porch, but she just squeezed herself in, curled up and slept.  She liked it there.  I hated that she did that, because she always came out dirty and messy.  As hard as I tried to discourage it, she would dismantle the barricades and head back under.

One day, I was sitting at my computer trying to come up with a name for my new website.  I was scribbling stuff on paper, but nothing was working for me.  Then, because the door was slightly ajar, Zuki came in from outside.  She had obviously been under the porch because when I put my hand on her back to pet her, a huge cloud of dust and dirt went flying.  Dusty Dog Digital was born.

Zuki died at a young age, about seven years old.  About six weeks after surgery to release stenosis in her lumbar spine, she went down with what turned out to be a condition called fibrocartilagenous embolism (FCE), a stroke-like event in her cervical spine.  It rendered her a quadriplegic.  I made the decision to euthanize her, because 110 lbs of a quadriplegic wolfdog was unsustainable, medically, financially, and emotionally.  As hard as it was to do, it really was an easy decision.  She is memorialized in the In Memorium Gallery, located here. 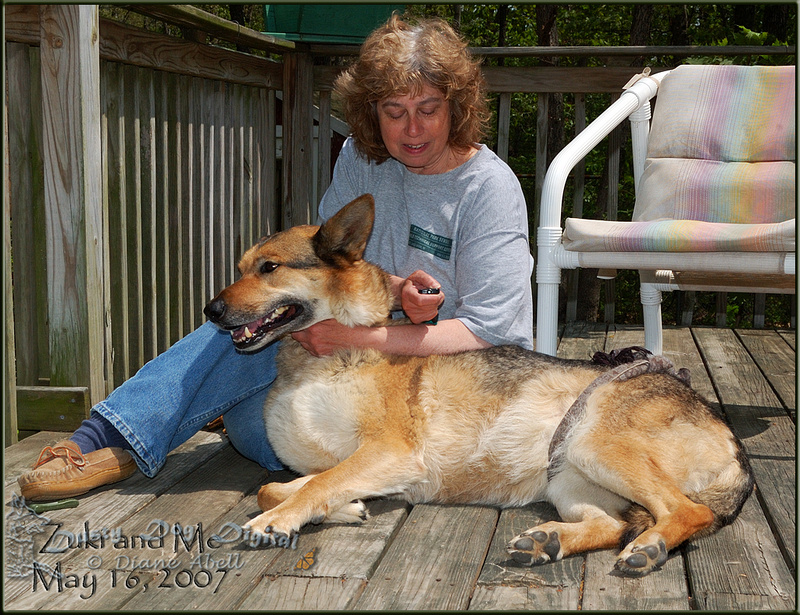 This is Zuki and me with a camera remote to trigger my camera, which was set up on a tripod.  The scarf around her rump was to help her get up, as the spinal stenosis made her very weak.  At this point, I think I saw the writing on the wall, saw that her days were numbered, which is why I took this image.

I have moved on from that original site.  And the next one.  And the next one.  I am here now.  This site is hosted by Zenfolio, which has all the tools I need to upload images, tweak settings, and lo and behold, it even has a blog!!  There are still some quirky things about the site that need to be worked out, but as always, this will be a work in progress.  We hope to write about photography, of course, and our trips, camera gear, and ourselves.

Welcome and thanks for visiting.